Last we left Gumby and his friends, he was swimming

in a pool toward a dead body with something moving under it. Vim ran and hid behind Vigor who stood near the edge of the pool in case Gumby needed help. Pokey squinted at the body in the

Gumby stayed still until a black shadow surfaced next to the body. A black plastic purse! It must be filled with air. Gumby swam to the body, and pulled her to the side of the pool by her suit jacket, the coat floating off of her body. Creeped-out Gumby jumped out of the pool, and stood next to Pokey waiting for the police. “Should we take the purse out of the water?” Gumby asked Pokey as if she knew what to do. “No, let the police do that.” They all glanced at the purse as it sunk to the bottom of the pool. “Well the police are going to have to dive in for that,” Gumby said. “So much for going for a swim.” He felt 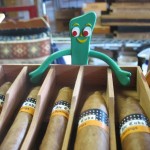 down again. Nothing seemed to be going right. Now, all he wanted was a drink and a smoke.

(Gotta do something with that purse, I thought)

Pokey inspected the body, and Vigor helped her turn it over so that the eyes face stared up at them. They gasped! Pokey moved aside so Gumby could see. Around her neck was a blue blotch of bruising. She was strangled! (I knew there had to be some clue on the body since there was no blood.) She was murdered! (yep, murder mystery) They all jumped back a step as if she would come alive.

Pokey trotted over to the house and twisted all the doors knobs. Locked. The gate was locked and the house was locked. Maybe there were keys in her purse? “Go get her purse, Gumby,” Pokey nudged, “Maybe there is a clue in there. We can help the police. Aren’t you curious? I am.” Vim ran around the pool. “Me, too! Me, too!” he shouted as Vigor nodded. “Go get it,” Vigor added. Gumby sighed, but had to admit he was also wondering about what secrets the purse held. “Okay.” He jumped in the pool and enjoyed the splash of cool water on his green skin. He dove to the bottom and grabbed the purse. No sooner did he pull himself out of the pool, Pokey snatched the pocketbook, opened it, and turned it upside down letting the contents fall onto the cement walk along the pool. What fell out of the purse as the police sirens could be heard approaching?

(Gotta go and figure the rest of this out. No, I don’t know what happens yet.)