As I tried to conclude the Gumby story, letting my unconscious run away with me once again, I asked the drowned woman in the pool, “Who killed you? What were you doing near the pool or in the house? What was so special in your purse? Was the proof to the murder already in the murderer’s hands?” Then I asked the others what they thought. Vim didn’t have many thoughts on the subject, and Vigor thought the butler did it. Pokey spilled all her mystery-reading knowledge and swore that the police person who came to the scene first killed her and would protect himself or herself by collecting all the evidence, if they left any. She had read that, she told Gumby. Gumby thought that might be too complicated, but wouldn’t dismiss it.

The keys, rolled-up hundred dollar bills, and missing identification caught Gumby’s attention. Who was this lady, he wondered? Who cared about her, hated her, and what kind of work did she do? What kind of trouble was she in?  Was she an innocent victim or did she attack the attacker? This corpse peaked his interest.  “I’m going to collect all the clues,” he announced to Pokey and the others, “and take a look around. I have a gut-level feeling bout this,” he added in his most

efficient voice. “The police are here,” Pokey shouted as the police car drove up some where in the front of the house. “You better hurry!” Pokey trotted toward the end of the pool near the house away from the gates. “There’s only one officer. He looks all officer-icious. He’s got huge eyes, probably to help him see all the clues. 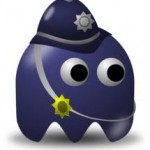 Gumby had noticed something in the water while swimming to the unfortunate woman. He only thought about it when he let his mind focus on different objects under the surface. Without thought, he dove into the pool. He studied the area and found what had flashed in the sunlight as he recovered the purse. The water filter in the pool! The intake nozzle seemed ajar! Maybe she hid something in there before she died? As far-fetched as it seemed to Gumby, it felt right. He loosened the nozzle, and …

Stay tuned for the finale of Gumby, and the closed-gate mystery. 🙂