I volunteer for Little Brother’s Friends of the Elderly, a group created in France during World War II in hopes of uniting elders who have lost family, with young children who also lost family. Now in several US cities, the goal of LBFE  (www.littlebrotherssf.org) is to match volunteers with an elder, especially those who live alone, have no family, or the family lives at a distance.

I volunteered to drive DeDe (above) to the St. Patrick’s Day party and be her companion during the day. Besides eating, drinking (coffee), listening to the entertainment, and playing bingo, we gossiped

with other elders, met John a voracious reader, mainly of historical events, and all decided that the San Francisco bay area was the place to live.

So many people gave of their time and energy. The entertainment and the staff cajoled and sang, and acted as waiters and waitresses. Seth Augustine, Program director, coordinated the go-to party of the day.

But DeDe proved to be the prize of the day as she unfolded her life’s story. Born in Austria, she learned to ski young, not a surprise. She loved skiing and biking, but especially swimming. She still swims an hour a day at 91.  She was a Holocaust survivor. While riding her bike one day in Nice, France, her mother, who refused to leave, was taken–and never seen or heard from again. Imagining her mother dying in the “showers” gave her nightmares. Her father had died when she was nine and before the terror began. She traveled throughout Europe and did odd jobs meeting wonderful and helpful people along the way, and learning four languages fluently: English, French, Spanish, and Germain. DeDe settled into a home as a caretaker at eighteen back in Nice, but was captured toward the end of the war and brought to a camp in Portugal.

I never knew that some of the countries had their own little Nazi camps. DeDe could speak fluent Spanish and would talk to the guards, who later, let her walk about the tiny town. While walking in town she asked some men to help her escape, explaining her story. They did, and she headed north. Later, she wrote her Aunt in America, but people in Austria were not allowed visas, so she immigrated to Montreal, but hated the cold. Visiting her aunt in NY, she knew one day she would come back to America. Many years later, after going back, once again to Nice, she came to NY and met a man from San Francisco. One daughter, and one lifetime later, she continues to reside in her apartment of twenty-something years. She likes going to the Friends of the Elderly parties and meeting all the young volunteers and other elders.

I felt touched meeting her. Although I’m not a Bingo fan and the cacophony of singing-with-the singer usually curls my skin, I loved every moment of the day. It took some effort to open DeDe up, and her hearing impeded some understanding of my questions, but once the background noise stopped and we sat head to head, her words flowed into her life stories.  Wonderful.

Last we left the Gumby’s crew, Gumby dove into the pool where he had previously retrieved a plastic purse. He had remembered seeing the filtering system nozzle somewhat ajar, and wanted to inspect it.

(At this point, I didn’t have a clue what Gumby would find. At first I thought a weapon, but what good would that do the story, especially jammed in the nozzle? The filter nozzle was too small for anything useful. Then I pondered a disk, hidden with spy information. But really, spy stuff is really not “in” right now. How about a drone sensor and a list of those to be murdered? Nah, didn’t feel right. That’s international stuff. I wanted to keep it lighter, unhappy person to unhappy person. Well, then maybe he finds nothing. I didn’t like that either. Time to end this story. Gumby would have to stretch his abilities and find the biggest clue of all, if not the motive.) He unscrews the nozzle and carries it with him to the surface, massive amount of water now running through the drain.

Once on the surface, Officer Blue awaited his return. The Officer gaped at Gumby, and Vim and Vigor, with Pokey, watched over his shoulder as he disassembled the filter. To all their surprise, (and mine when I thought of it,) was a laminated, hand painted, portrait of a panther. “I know that panther!” Gumby shouted. And on the photo was a a dollar amount and a short note. $3,000 for the mold of the sculpture. Aha, Officer Blue and the others yelled. Now, all we have to do is count the money! The officer, not concerned about crime scene

evidence being touched–even though the money was soaking wet– unraveled the roll of hundreds, and sure enough, the amount totaled $3,100!  “She was going to pay for the mold of the un-famous panther! But why would someone kill her for this mold, and why did she hide the photo before she drowned?” Gumby asked. Vim hopped around like a Jack rabbit. “I know, I know! Call on me, I know!” The officer pointed to Vim. “Because, well it’s obvious, because the panther was going to become famous, and the murderer wanted more than $3,000, and not just a hundred bucks.” Vim smiled his widest smile. Vigor shook his head back and forth contemplating the option.  “I think the extra money was for her to get home,” Pokey suggested, “and maybe even have dinner along the way.”    “Well,” Officer Blue said, “We have a dilemma. I’ll take all the evidence back with me and we’ll go through it piece by piece.” He pocketed the picture and the money. Pokey, not liking what she saw said, “Have you ever been to this house before officer?”    “No, I haven’t,”  Officer Blue proclaimed. Siren could be heard around the corner. “A aha!” Gumby yelled. “We got you!”  “Oh! I was right! It’s police officer!” 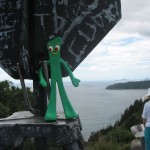 PS… When I saw the picture of Gumby with the panther, I had my answer. Thanks to Peter Schmidt’s photos of Gumby on their vacation, and lots of other places—––

Next: We go back to the serious, the psychological, the lonely and “The Art of Being Alone.”