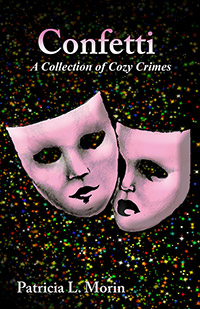 from Confetti: A Collection of Cozy Crimes

The large-screen TV blared the news so that all four family members in the large log cabin could hear it from four different rooms. “Another body has been found which police are initially treating as the seventh victim of the so-called Pizza Man serial killer. A traffic helicopter spotted the car on a remote side road in Lee Canyon, eight miles south of US95. Though the body remains unidentified, sources close to the investigation have confirmed that the automobile in which it was found in the backseat belongs to fifty-two-year-old Hector Schmitt of North Las Vegas…”

Short redheaded Edna, with her fiery gray eyes and buck teeth, grabbed the remote and muted the television. “One week!” she yelled at her husband, Don, even though he was sitting right next to her on the living room sofa. “That man’s body was in the car for a full week before they found him!”

“Probably frozen in this cold snap,” Don leaned back and breathed easy. “Whoever heard of snow and temperatures in the twenties this close to Las Vegas? Turn on the heat, for God’s sake, Edna. Or we’ll all be just as stiff as that corpse.”

The doorbell rang. Edna jumped up off the couch.

Edna turned to her husband, eyes wide. “Did you order a pizza, Don?”

He reached for the remote to turn the sound back on. “No, dear. I didn’t order a pizza, but boy, I could go for a nice large pepperoni right about now,” he said sarcastically. “Maybe we should just let him in.” Don chuckled as he flicked his dark hair out of his even darker eyes.

“Wait! I’ll go check with the kids and see if they ordered a pizza without telling me. We have to be careful with all that’s happening.”

Edna had run halfway up the stairs before she heard more pounding on the front door.

“Pizza delivery!” the deep voice yelled out again, even louder and, now, annoyed.

“Hurry up, ask the kids,” Don said in a stage whisper, then approached the door. “Be right there! Hold your horses!” he shouted, as if the pizza man was hard of hearing.

Edna’s leaped the final steps two at a time. She hurried into the room her fifteen-year-old son occupied. Junior sat in front of the computer, engrossed in a Captain America movie, red wavy hair uncombed, a Navy jacket on, and Thinsulate gloves covering both hands.

“Did you order a pizza, Junior?” she demanded.

“No, Mom,” he responded with his back to her. “But I sure would like a couple slices of chicken barbecue, if someone else did.”

“Yeah, I know you would,” Edna turned to leave.

“It’s freezing in here, Mom. Turn on the heat!”

She scooted into the next room, where thirteen-year-old Sis stretched her lean body on the bed, long dark hair ruffled on the pillow, school books scattered around her, texting on her iPad.

“Sis!” Edna caught her attention. “There’s a pizza man at the door.”

“No, Mom, I didn’t order a pizza!” Sis glared at her mother. “But would you please turn up the heat? If you don’t, I will! I’m sure Junior and Dad are freezing, too.”

Edna scanned the room. “How can you get anything done in this pigsty! If I told you once, I told you a thousand times!”

“You are so compulsive. It’s a disease, Mom. You know it?” Then she softened and grinned, then said, “I really could go for a vegetarian. I’m hungry. Go check, Mom. I know you ordered us Pizza. I heard you call.”

Edna raced down the steps, shaking her head at Don, who was watching her closely.

Edna stared at Don. “Do you think it’s safe? This Pizza Man killer is on the news again! And the last body was found not too far from here.”

“Well, the door’s chained. While I go get the gun, why don’t you open it a crack and ask him for his ID to make sure it’s not the wrong pizza man?”

Don left the room as Edna stood by the door. “Are you sure this is the right address?” she yelled through the door.

“Yes!” The delivery guy repeated the address. “It’s freezing out here, lady! You ordered four large pies, or someone in this house did! Now, you either open this door right now or I’m leaving! I mean it! I want to get home before the storm hits!”

Edna opened the door and peered out. “What’s your name?”

“My name? What’s that got to do with your bill of sixty-two dollars and twenty-three cents?”

Don stood behind her, .45 semi-automatic in hand, as Edna opened the door.

“Finally!” A middle-aged man with thick wet glasses, a snow-covered mustache, and a stack of pizza boxes stepped inside.

“Yep,” Edna answered. “I ordered the pizza. And yep, you’re the right pizza man.” She stretched her arms toward him to take the four boxes.

As George Wynn was handing them to her, Don raised the gun and hit him over the head, hard.

The man’s look of horror went blank as he fell to the floor.

“Junior! Get down here and help me with the body.”

“This time, let’s put George Wynn in the trunk of his delivery car.”

“Sis,” Edna said to the girl coming down the stairs, “bring these to the kitchen.”

“Great. Let’s eat. I’m starving, and we can warm our hands on the pizza.” She grabbed the boxes.

“All right.” Edna followed Sis into the kitchen. “But let’s hurry up. We don’t have much time. And don’t touch anything! I have enough fingerprints to wipe off as it is.”

“You did order the vegetarian with extra cheese, didn’t you, Mom?”

“Of course I did. Do I ever do anything differently on these jobs? You know how compulsive I am, and it’s not going to stop. It hasn’t failed us yet, has it? Did you clean your room? Pack your pillow and the extra sheet on the bed? I don’t want you leaving any of your DNA around.”

“Uh huh.” Sis chewed her piece, swallowed, then added, “Mom, I did everything we always do when we break into someone’s house. I hate this one. Next time, a bigger one, in a warm place.”

“Talk to Junior. He does the casing.”

“I liked it better when Dad did it.” Sis pulled the two-liter Pepsi bottle from the brown paper bag.

Don and Junior stomped their plastic-covered boots on the porch floor before they came into the house. “Let’s make it a quick dinner, then hit the road,” Don said, sitting down and opening the box with his pepperoni. “We need to outrun this storm.”

Junior grabbed a slice of chicken barbecue. “Who was this guy, Dad?”

“This guy? George Wynn? His real name is, or was, George Drysdale. He supposedly serving a life sentence in Arizona for the murder of a twelve-year-old girl, Jenna Syreen, who was walking the family poodle in front of her home.”

Sis stopped eating and looked at her father. “Where in Arizona?”

“Mesa! That’s only a few miles from where Sarah was kidnapped! Do you think he might be…?”

“We’ll never know if he’s the one, Sis. But we do know that he’ll never do a young girl any harm ever again.”

“How much is he worth?” Junior wanted to know.

“We’re going after the bigger rewards now,” Edna said. “We have to think about your college tuition.”

“Well,” Don said, “we’re running out of pizza men. Since we started this project last year, pizza places are checking the background of their delivery drivers more closely. Now it’s time to move up.”

“Yes,” Edna said. “The jobs will get more dangerous, but they’re worth a lot more money.”

Don finished chewing, put down his slice of his pepperoni, and said, “Other bounty hunters.”