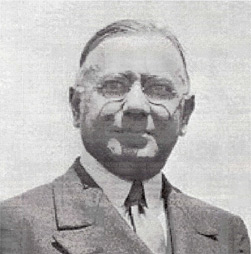 The Chinese-American detective of early 20th century fiction, Charlie Chan, was conceived in the mind of Earl Derr Biggers in 1923 after reading an article about two Honolulu detectives, Lee Fook and Chang Apana, and their exploits in squelching an opium deal and arresting a Chinese dealer in Hawaii. Biggers, who had visited Hawaii in 1919, had already developed the plot of his first Hawaii-based mystery, The House Without a Key, before he stumbled across the story about the opium bust.

In an April 10, 1931, interview with the Syracuse Herald, Biggers recalled, “I went to the New York Public Library and glanced through a huge bunch of Honolulu newspapers in order to refresh my memory about the islands …. I came across a small unimportant item to the effect that Chang Apana and Lee Fook, Chinese detectives on the Honolulu force, had arrested one of their countrymen for being too friendly with opium. … I decided at once that … a Chinese detective would be a good idea in The House Without a Key. Sinister and wicked Chinese were old stuff to mystery stories, but an amiable Chinese acting on the side of the law and order had never been used up to that time.”

Biggers referred to the Orientals as “Japs” and “Chinamen” and described Chan as looking like a big ivory-skinned Buddha. He knew little of the more than 40,000 Chinese living in Hawaii at the time, immigrants who were contracted to work on plantations and roads and, after their contracts expired, opened businesses, fostered education for their children, and shared their culture and herbal medicine with Hawaiians and visitors.

Biggers admitted his lack of familiarity with the Chinese in the same Syracuse paper, in which he described an imagined discussion between Chan and himself. “Said Biggers in a mock dialogue with Charlie, ‘but how can I write of the Chinese? I know nothing of same. I could not distinguish Chinese Man from Wall Street Broker. To which Charlie answered,
‘Chinese would be the one who sold you the honest securities.”

Earl Derr Biggers graduated Harvard in 1907 and worked for Bobbs-Merrill Publishers before ending up at the Boston Traveler Magazine in 1908 as a daily columnist, then a drama critic. There he met his future wife, Eleanor Ladd who, together with living in New England and learning more about journalism, influenced his writing. After he was fired, due to a change of ownership in 1912, he wrote his first novel, Seven Keys to Baldpate, one chapter a day. It was published in 1913 by Bobbs-Merrill Publishers. George M. Cohan secured the dramatic rights to Biggers’ book and produced the play on Broadway. He finished a second novel, Love Insurance, which was turned into the play See Saw.

The Biggers lived in the cultured worlds of Boston and New York. Earl Derr loved food, travel, and golf. He and his wife vacationed in Waikiki in 1919. There, he imagined the perfect murder—as he sat on the beach watching the cruise ships come into port—and he immediately started The House Without a Key, based loosely on the Grey’s Hotel cottages where he and Eleanor stayed and where the doors were never locked.

However, when he arrived home, he wrote ten short stories for the Saturday Evening Post and continued with his theater interests. He didn’t return to his murder novel until four years later. Biggers recounted in the Honolulu Police Journal in 1931, “Charlie appeared in the Honolulu mystery, starting as a minor and unimportant character. As the story progressed, however, he modestly pushed his way forward, and toward the end he had the lion’s share of the spotlight.” Biggers saw most of his novels made into movies, starting with The House Without a Key.

Earl Derr Biggers did not want Charlie Chan to be his legacy. He’d planned to write other books until the stock market crashed in 1929. Needing money, he continued with the Chan mysteries. He finished six Chan mysteries before he passed away from a heart attack in August 1933 at age 48. Several obituaries praised Earl Derr Biggers for promoting an international understanding and paying tribute to the Chinese. Charlie Chan not only entertained readers, but also opened a door to people’s curiosity about a culture half a world away.