I was so excited this week–one of my short plays was accepted into Flush Ink Productions in Waterloo, Ontario, Canada. I was spewing virtual champagne to everyone. I was now an international playwright. I said to several of my friends, “That was one of the three items on my bucket list–along with getting an agent for my book, and finally getting my scuba license.” One of my friends said, “You’re too young to have a bucket list.” Then I wondered aloud, “Really, how old do you have to be?” That got my curiosity juices going, and pushed my “research it” button. 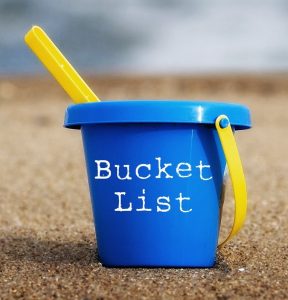 So here are some of the suggested histories of the word: from the Internet, and before the movie “The Bucket List” with Morgan Freeman and Jack Nicholson (2007).

Some people say that it dates back to the Middle Ages, when a method of execution involved the victim standing on a bucket with a noose tied around their necks.  The bucket would then be kicked away and the victim would strangle to death.

Wikipedia states: Its earliest appearance is in the Dictionary of the Vulgar Tongue (1785), where it is defined as ‘to die’. In John Badcock‘s slang dictionary of 1823, the explanation is given that “One Bolsover having hung himself from a beam while standing on a pail, or bucket, kicked this vessel away in order to pry into futurity and it was all UP with him from that moment: Finis“.[3]

Another popular theory involves a reference to the Catholic custom of holy water buckets.  It used to be that after a person died their body would be laid out and a bucket of holy-water would be placed at the feet of the corpse.  Friends and family who came to visit and pay their respects would sprinkle the body with the water

Finally, there was once a children’s game that was quite popular. In this game children would kick a ball about buckets that were placed randomly.  If they “kicked the bucket” they would automatically lose the game and have to sit out.

The term “bucket list” was not in one of my favorite reference books, The Facts on File:Dictionary of Cliches by Christine Ammer. I believe because the term “bucket lists” also applies to computers, and an early definition having to do with gathering of words, their meanings, as well as opposite and similar meanings, and placing them in a bucket–a precursor to the dictionary. 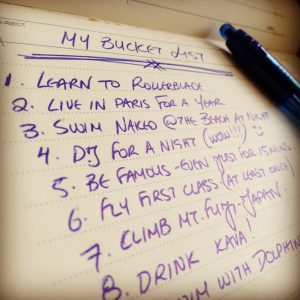 The list is associated with death, and fostered by the movie, what you place in that bucket before you kick it away– things that you would want to do before you die,  (maybe within a very short time, or not).

What kinds of things would you put on your bucket list?

My bucket list is ongoing, and ever-changing. Since I’m still alive, and I have dreams of accomplishing different goals at different times. Actually, having achieved some of my dreams, my list became more of an ongoing-life’s list, rather than a before-death list–hence, no age limitation. Is that like: is your cup half-full or half-empty? Hmm …

What I like most about the meaning of the words, bucket list, is the seriousness of the contemplation before I write my list–because of the history of the word. I evaluate the most important achievements to reach–even if it’s only until my life changes again, and another dream comes to the foreground. Some items do drop off the list as time goes by, too. I asked myself: “What were you thinking? Jump out of a plane and hope the chord works? Naa.”