This is my article to Sisters In Crime Newsletter 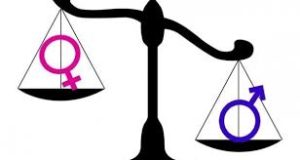 I was drawn to the relationship between gender parity in theatre and publishing through my work with the International Centre of Women Playwrights (ICWP). Of which I am the president. We had just completed our 50/50 Applause Award honoring theatres that promote women playwrights on an equal basis to male playwrights. ICWP’s mission is to connect, inspire, and empowers women playwrights to achieve equity on the world stages.

The theatre world is dominated by men: artistic directors who choose the plays, directors, board members, decision makers, and other employees. Women’s productions on main stages is where bigger budgets are allotted for royalties, actors, and marketing. Unfortunately, the statistics for women productions has only ticked up oa few percentage points in the last seven years (from 25 percent to 28 percent, and in some places 30 percent). Although ICWP reached Seven countries outside of the US: Australia, Canada, Finland, Scotland, Singapore, South Africa, and Wales—our percentage of theatres promoting gender parity remained low.

In late 2017, American Theatre magazine reported that, out of 513 not-for-profit theaters across the U.S., only 26 percent of their new plays and revivals were written by women, with 63 percent written by men and 11 percent co-written by women and men.

Women playwrights were paid less in royalties, given smaller stages, and had fewer performances.

My work with ICWP and gender parity led me to ponder about women who write mysteries. Are women mystery authors paid equal or close to equal royalties to their male counterparts? Similar advances (given same individual publishing data)? Do they get equal review space in newspapers and magazines? How has the women movement impacted women mystery writers as far as equal pay and equal opportunity?

Let’s take a short look at what has happened in gender parity over 2017 and 2018 thus far. 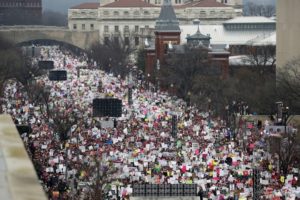 In January, 2017, the first Women’s March, one of seismic proportions (over 4,000,000 women), created a tsunami of awareness and solidarity that flooded major US cities, as well as other cities throughout the world. Women were taking a unified stand.

Actress America Ferrerra, during th march, said,  “We stand together in solidarity with our partners and children for the protection of our rights, our safety, our health, and our families.” January, 2017  https://www.womensmarch.com/

This march was repeated again in January, 2018

The #MeToo movement spurred on more resistance by women. What began in October 2017 rocked the film, media, publishing, and theater industries across the world–when actresses started using the #MeToo hashtag on social media to demonstrate the widespread prevalence of sexual assault and harassment. It followed on the heels of the Harvey Weinstein sexual misconduct allegations

The #MeToo, #TimesUp, #I’m With Her movements strengthened the power of the Women’s March, 2017-2018. Issues of job discrimination and pay discrimination shared the spotlight with sexual harassment complaints. Women were asking questions, becoming bolder, and demanding recognition. Men in power were stepping back and reevaluating, while also being made to answer for sexual harassment complaints. Women, also, mind you, but men more so.

Leigh Anne Ashley, writing in Writer’s Digest said, “There seems to be no genre that has not been impacted by women finally feeling able and welcome to tell their stories. A recent Google search with the words “#MeToo articles” returned 6.6 million results. To those of us who have been paying attention, seeing the internet filled with so many women’s voices, including so many new voices, is a remarkable thing. I’ve noticed a shift in my writing; I feel gutsier and less apologetic.” “The #MeToo Movement and Its Impact on Women’s writing.” March 29, 2018 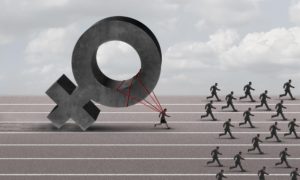 Has this movement helped women mystery writers on the road to gender parity?

I say yes … even though the crime writing, mystery world has slowly been amassing female authors, the publishing world around them needed to change.

“Though overall numbers have improved, more mysteries by men than women are nominated for and receive high-prestige awards,” Barbara Fister wrote in Bitchmedia 2014, “More men than women are reviewed in high-profile publications such as The New York Times, Washington Post, and Wall Street Journal. Women are far more likely to be published in paperback than hardcover and find the warmest review reception among book bloggers, who are increasingly important contributors to book criticism but get less respect than “professional” reviewers. “Women make up more than half of the mystery writers—but get criminally few reviews.”

Unlike plays that are divided into flash, short, one act, and full-length, the fiction world breaks down into many genres, with more delineated statistics: Gender Ratio of the Best-Selling Genres by Decade: https://pudding.cool/2017/06/best-sellers/ “Bias, She Wrote,” by Rosie Cima of Pudding breaks down the history of M/F percentage in the fiction world from 1950 to 2015.

The publishing business, however: “Publisher’s Weekly’s annual salary and jobs 2016-2017 survey certainly (also) backs up the …  power that men hold in the publishing industry. Despite the fact that men are a minority (20 percent) of the overall workforce, 51 percent of managers are men (2016). Publishers Weekly Survey 2017 (PW, Nov 3, 2017 Jim Milliot) Women dominate men as literary agents.

Female crime writers have fared the best, with a slow but steady rise in the last ten years. Today, men are using female pen names to sell crime mystery, a real turnaround in the world of publishing! As Sophie Grant states in The Atlantic,August, 2017 “Over the last decade, female writers have come to dominate crime fiction, a genre traditionally associated with men.” “Why Men Pretend to Be Women to Sell Thrillers.”

“Also, through the work of Sisters in Crime 1986-2013, the percentage of mysteries by women reviewed in the New York Times Book Review went from a miserable 17 percent in 1987 to 36 percent in 2013. The Paris Review and the New York Times have grown more responsive to women’s writing. The New Republic and The New York Review of Books, not so much. We know women have been seriously underrepresented in high-prestige venues, and that this situation can be improved” (Fisher also wrote in  Btichmedia).

And so it has … 2016, and especially 2017 sees a marked change in the number of reviews, and the number of awards, as well as the number of mystery authors on the top ten list of Times, Post, Atlantic, Kirkus, and others.

Where does that bring us? Women in the mystery and crime genres are nearing perfect gender parity and, notwithstanding gender-changing names from men, have flooded the market!

In 2016, the New York Times selected four women and six men on their “best-of- mystery list”. In 2017, the number for the Times remained six men and four women.

Booklist for 2017 named fourteen men and six women as their best for the year.

Although … reviews on women’s mystery books are still lower, and the recent pay differences between male and female mystery writers were not available Although … a recent article by Danuta Kean in The Guardian states: “Women fare worse, according to the survey, earning 75% of what their male counterparts do, a 3% drop since 2013 when the last ALCS survey was conducted.”

In the US, there were (202-2012) fluxes in prices from women and men books according to genre, and women identified books (Romance) were not consider as highly as other genres. There is more to be explored on the recent issue of pay differences between men and women authors.

In most areas, though, women authors have leaped to the forefront in mystery and crime fiction: A success story, and one we hope to see in the future with playwrights.