Do Publishers Dream of Robo-writers?

The pressure is on for authors to sell books. With book stores closing because of Amazon and other internet outlets, publishers demanding authors to do their own marketing, publishers delivering contracts with less incentive, and selling books cheaper, it’s a wonder authors don’t just pack up their pens, and close down their imaginations.

But now, we may be replaced by robots!

Robo-journalism was used to report an earthquake in Los Angeles, CA, in March, 2015. The article, however, was based mainly on data from the US Geological survey. Here’s the article: “A shallow magnitude 4.7 earthquake was reported Monday morning five miles from Westwood, California, according to the U.S. Geological Survey. The temblor occurred at 6:25 a.m. Pacific time at a depth of 5.0 miles. According to the USGS, the epicenter was six miles from Beverly Hills, California, seven miles from Universal City, California, seven miles from Santa Monica, California and 348 miles from Sacramento, California. In the past ten days, there have been no earthquakes magnitude 3.0 and greater centered nearby. This information comes from the USGS Earthquake Notification Service and this post was created by an algorithm written by the author.”

“However, As well as the earthquake report, it also uses another algorithm to generate stories about crime in the city – with human editors deciding which ones need greater attention”, the article continues (LATimes March 17th, 2015). 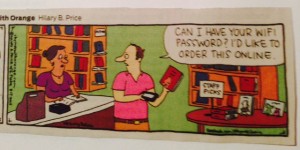 Don’t know why they stuck in the comic about bookstore and their lowly customers, but thrilled an article of mine made a lit magazine.