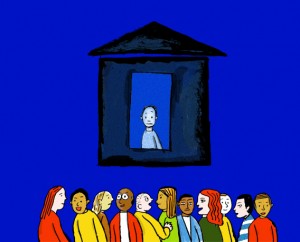 My friend’s dog died Sept. 18 from an oral cancer less than four months after diagnosed. She couldn’t understand how this could have happened, and when asking veterinarians about this cancer, was told that mouth and nasal cancers in dogs are on the rise. 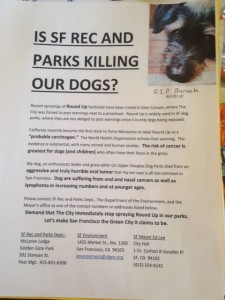 It came to her attention that San Francisco sprays herbicide “Round Up” (Glyphosate) by Monsanto, liberally to the parks and dog parks. California demands that Monsanto place a “black box” warning on it’s product which translates to “probably causes cancer”.

Children play on this herbicide treated grass. They are obliged to post a warning near schools, but not dog parks when spraying. Children crawl around on this treated grass.

Check what herbicides are used to control weeds in your town, city, local area.  Call or email the environmental agency closest to you. For San Francisco: environment@sfgov.org

Also, in the agriculture world,  Monsanto now makes seeds for soy, corn, canola, cotton, alfalfa, and beets that are “Round Up resistant”. Monsanto’s “Round Up Resistant” genetically engineered (GE) crops have had the effect of increasing the use of this herbicides by many times (in an attempt to kill the “weeds,” which also rapidly evolve resistance).

In areas growing Monsanto’s GE crops, the rates of human cancer are sky-high.  A study in France (published in 2012, but silenced until 2014) showed a double increase in breast tumors in people exposed to Round Up. The tumors were also more aggressive. There was also an increase in pituitary glands. In some heavily sprayed farming villages, cancer is up 31% in Brazil, Uruguay and Paraguay devoted to GE soy production, while in ranch areas, the amount is up 3%.

The scary part, as if the above is not frightening, we are being exposed to Round Up residue 500-4000 times the amount proven to cause cancer.

So, get involved. Call your local government. Discover what pesticide/herbicide they are using, and demand they use organic pesticides/herbicides for the well being of our children and our pets.