Larry and I were walking around Santa Rosa waiting for the 6th street theatre to open. We picked up Sonoma County Peace Press (June/July 2015) and I read this article, word for word as printed, and was very touched by the video and the new research in reaching Alzheimers patients.

Barry Ponneck is a long-time peace and justice activist who lives in Windsor, California with his trusted and loyal pal, Duke, his service dog, and his roomate/caregiver. This the first-half of Mr. Ponneck’s article:

No one wants to end up alone and isolated in a nursing home. It’s hard enough to lose someone you love to Alzheimer’s or other

forms of dementia. It’s terrifying to think you could end up there yourself, someday. I should know. Because of circumstances in my life, I ended up in a skilled nursing facility (SNF) and spent 14 months feeling alone, isolated, trapped. If not for the extraordinary support and love of some very dear friends, I might never have walked out of that facility. This story is not, however, about the negative aspects of nursing homes in general or about what I experienced living in the SNF.

What it is about is the magic of music and how we can improve the lives of Alzheimer’s sufferers and those who have other forms of dementia. The best part of this is, the remedy is extremely inexpensive! How is this possible, you-ask? About six months ago I went to see a “must see documentary” called Alive Inside. I was initially hesitant to see the film because my 14-month nightmare was still way too recent, and … it was about people in nursing homes. 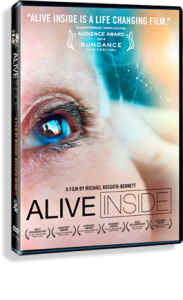 Well, I talked myself into going and it was without a doubt one of my better decisions. I laughed and cried along with the rest of the audience, and by the time I left the theater, I had decided I wanted to do something to assist this amazing organization, Music & Memory, Inc. What Music & Memory does is simple, elegant and effective: They train elder care professionals, private caregivers, and family members in how to set up personalized music playlists delivered on iPods and other digital devices, for those in their care. These musical favorites tap deep memories not lost to dementia and can bring residents and clients back, enabling them to feel like themselves again, to converse, socialize, and stay present.

It’s truly amazing what music is capable of doing Watching the many different residents, who are provided with an iPod programmed with their favorite music was a kin to turning a light switch on and off. In the off position, the resident is in his or her own world, not talking or interacting with anyone else, almost in a state of catatonia. When the music is turned on, it’s like they have woken up from a deep sleep. The scared, isolated stares are replaced with smiles, laughter, and often singing along with the music … like Harry in the video.