Even the little beings, with little energies, touch our hearts. Bye, littlest one.

Coral liked when you talked to him. He  would swim to the front of the bowl and look at you. Although they don’t blink, for any of you who ever wondered about that, the eyes move and he would sometimes swim a little bit a way, but stare at me. We developed a little trick. I would move my finger slowly up the bowl and Coral would follow, then he would be treated with some fried worms. Simple minds, simple pleasures. I know. I know.

But after studying this behavior, yes, between me and Coral, the writer in my decided to make it a story. In fact I wrote a play! “Talking to the Betta” is about two reality TV writer wanna-bes who visit NY from LA, and their friend asks them to feed and talk to her Betta twice a day for five minutes as payment for staying at her apartment. Well, you can imagine how you would feel if you had to talk to a fish for five minutes–He did his chore in the morning (and cheated on the time), She communed with the fish in the evening (and never cheated on her time). What comes from those conversations … well, you’ll see … I hope soon.

Coral traveled twice cross country and was even in one of my other blogs! Just to refresh your memory, this was his seat. 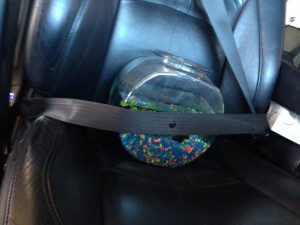 It’s odd that we miss him, to me, because we really didn’t spend that much time with him. He was just not a party animal. Couldn’t ask what he and the other boys did, because we knew one of the boys would be dead (Siamese fighting fish … aka Bettas … have to live alone.) However, he brought another form of life into our world … a little pal that filled a now empty spot on our bureau.

Larry sent him back to the sea, (a circuitous route at best) in a swirling farewell after he died. But like I said in the beginning, even the little beings, with little energies, touch our hearts.